He was good friends with our cat, Sammy, who we took in from a neighbor and her abusive knucklehed boyfriend and have been together since he was 1 year old and was about the same age.

Last night, Sammy slept in Charlie’s bed, alone, but, he used only half of it, as he did when he shared it.

I took Charlie out to ride with me on my motorcycle a few times: 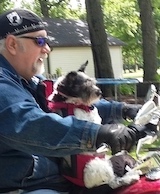 A couple of years ago, Charlie was very ill. We discovered a wonderful Vet, Dr. Hitt at Timberline Animal Hostpital in Joliet, IL who took X-Rays. It was a HUGELY swollen prostate. We thought Charlie was a goner. But Dr. Hitt treated him and gave use a few more quality years with him; restored him fully.  At that time we got Molly a Jack Russell/Rat Terrior mix to help us with Charlie’s passing. But he pulled through and he got a sister! Molly.

Well, Charlie lost his sight in recent months and I was trying an eye-drop to dissolve the cataracts, but, a stroke ended that. It was very hard to choose kill my little doggie; or so it felt. But, again Dr, Hitt was wonderful to explan his prognosis of confusion, dizziness and duress and we decided with heavy hearts the final gift we can give Charlie is to end his suffering.  He was with us for 15 years.

Below are some misc pics plus a video a Charlie talking to the Dog Poet, Les Visible.

Bye Buddy… will see you soon.