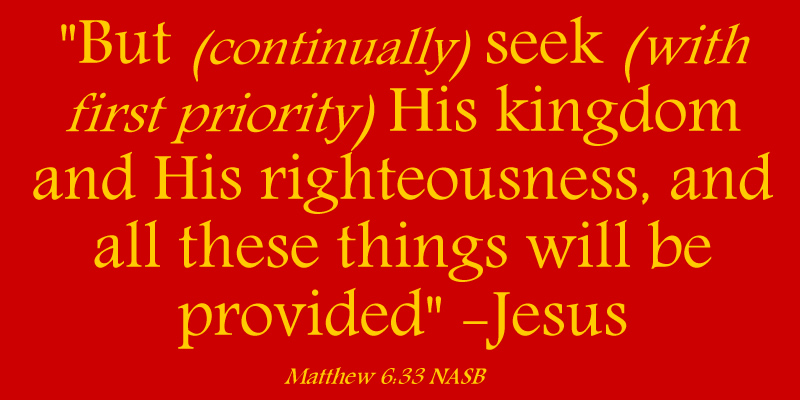 My Purpose: I am going to end the Extremist Left Watch on Facebook. I was not threatened for having it nor changed my mind on it’s content all of a sudden being wrong, etc. I have decided to heed my own advice recently given to a friend and will not focus on one slice/grouping of humanity’s shortcomings or evils, but, will focus on the universal principles taught by Jesus that applies without exception to all humanity and to which all can learn and becoming better humans and be closer to God. If we first sought this, all else would fall into line. We all will eventually die and move on to another reality that is some way is related to our choices and growth here.
Of course, doing this will expose evil in all sub-divisions, categorized by Humans. The mistake, I think, we make is to ignore the evil in our back yard while pointing out the evil in others; especially when that evil is more grievous and obvious thus easier to focus on. Pedophilia is worse then lying. Lying is worse the ignoring certain info that expose flaws in our paradigm. But it is by ignoring the smallest that allows the biggest over time.
An example is the ills of “The Left” is pointed out by “The Right” (and visa versa) and are thus ignored by either as propaganda to the frustration of Truth and Healing.
As I see the world, the smallest ill to the biggest abomination and the mechanism that has repeatedly and consistently redirected any advancement for good back to the growth of evil, I see nope hope for Humankind except for a fundamental and irreversible change in the human heart. What source or medium by which that change may come, to me, is unknown.
But if I were to put it in words, humanity would be utterly destroyed and the “video” of our folly would be used for eons to educate what happens when Self (Ego) is served at the expense of others.
However, since my understanding of God is He is far, far smarter and has the long-sightedness of eternity behind Him, there is an intervention that He can do (or perhaps already has begun) that Humanity cannot yet see, but will experience and will once and for all heal Humanity of it’s evil vein ever corrupting it’s endeavors.
The latter is my hope. The pre-intervention “video” can still be used (as mentioned above) as the intervention would come at a time well past hope and be obvious this evil must be removed, or Humanity will be utterly enslaved or destroyed. But I accept the destruction or the healing. What I do not want above all else for Humanity to fall into a perpetual delusional enslavement.
For those who say “we are the solution” think, after failing throughout all of our existence, “This time, we will get it right” and will use the same methods of power that continually is undone. This is madness.
But, they are close in that “We are the problem” and our solution is to seek God for healing. (The arrogance of many will never accept this. “It is better to rule in hell then serve in heaven”)
This has known by Evil and has been subverted. Aliens will save us, machines will save us, we are the gods who can save ourselves. All foolishness. All traps using the human ego against itself.
This course I will choose will be less popular then other media-types. Be it the MSM (Legacy Media), New Media or Social Media, Republican or Democrats, Liberal or Conservatives, Capitalists or Communists, Blacks, Whites or Browns, Jews, Christians or Muslims, Theists, Atheists or Agnostics, American, Russian, China or EU, Male, female or betweens, Flat or Globe Earth, the ONLY way to achieve success (numbers, viewers, money, etc) is to pick a side and play it (or if a believer, support it) against another.
This I will not do.
If you find anything I might present, usable in your search for Truth/God, etc, very well. If not; oh well. I am not proselytizing, selling or manipulating on any level. I am not looking for justification (an echo chamber) for my paradigm. Just humbly sharing what I have found over my years using the lack of contradiction to find Reality (A.K.A. Truth).