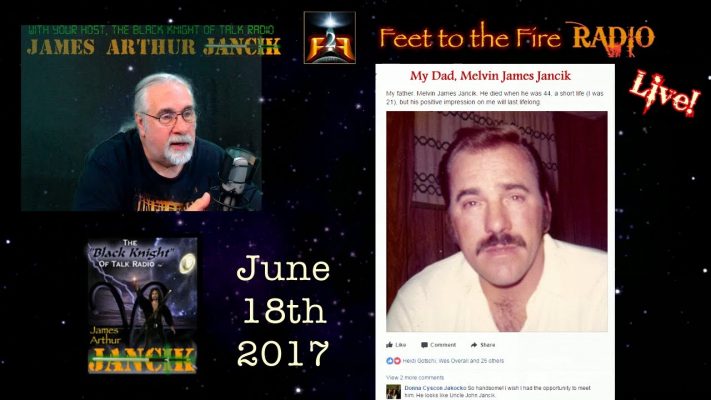 NOTE: I have fixed the “echo audio” that appeared in a few segments and re-uploaded the live broadcast from June 18th 2017. Nothing has been changed, but it does zero out all comments and likes. Just, you can now listen without a head ache – James

After our choices, Forward Ho!

Well, the last 2 weeks my Internet upload speed tanked JUST before going on air… has to record then uploaded… so far so good this week, but, it is early 😉

A run through the happenings of the week with my comments and analysis peppered throughout. After the “Line is Drawn” topic of last week, it seems, we are now moving forward with out choices… but so is The Ineffable. Plus new commentary from Les Visible.

Links referenced within the broadcast:

I watched Part One of Stone’s Putin Interviews. I was shocked by the incompetent, rambling, awkward “style” of Stone. Embarrassing. Bad questions. He did not even look at Putin when asking question, though, Putin can understand English very well. He even interrupted Stone, before the translator could translate to correct Stone. A squandered opportunity. Thank goodness Putin was a good interview in spite of the interviewer. I hope parts 2-4 are better on Stone’s part. Putin’s talk worth the watch.

Refreshing to hear the Ugly Truth up front about a war:
“We would win at great cost,” Mattis told the House Appropriations Committee Thursday,“It would be a war that fundamentally we don’t want”

“If this goes to a military solution, it’s going to be tragic on an unbelievable scale,” Mattis said in a press briefing in mid-May. “So our effort is to work with the U.N., work with China, work with Japan, work with South Korea to try to find a way out of this situation.”

This is the problem “sources” who are not “official” nor “named” at the time of the publishing information; no matter WHO it is. Better safe then sorry? That is week. Better safe and remove the President in case he may be with the Russians? We need to have “Just Cause” and “Reason to Suspect;” in both phrase there is physical evidence and.or reason. Not politics, fear or some other motivation.

4 days before Alexandria, Bernie Sanders ordered his followers to "Take your anger out on the right people"https://t.co/Rv9teKvrKW

North Korea is now ‘only one step away’ from launching a nuclear missile which can hit America, US expert warns